‘Except to have his forty thousand
Shoes in good repair’

Once we had a huge guest at home. It was Lakshmi, a young elephant. It belonged to one of our rich relatives. He wanted us to keep her at our place for a few days. Lakshmi was fond of ripe bananas more than sugar cane. We had plenty of bananas as we had three banana trees in our house, but the ripe bananas were kept in the cellar. Only grandfather could take them out and distribute. I wanted to be friendly with Lakshmi by feeding her with ripe bananas. So I waited for an opportunity and, as soon as grandfather was out, I quietly went to the cellar and took bananas for Lakshmi. She ate them with great relish. Later, grandfather found out that I had taken the bananas. I apologized to him for taking the bananas without his permission.

write the  story  using the hints given

1) Write the proper noun for the given common nouns and paste its pictures ( pictures should be on left side and names on the right side )
Use an A4 size sheet.
a) Two hollywood actors
b) Flags of two countries
c) Two monuments
d) Two well known authors
e) Two international leaders 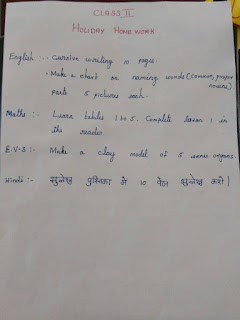 Circle the correct silent letter.
Add the correct prefixes (UN, DIS, IM, IN) to make the opposite.

Fill in the right homophone

Complete the sentences with did/made
Posted by Sarah at 22:45 No comments: